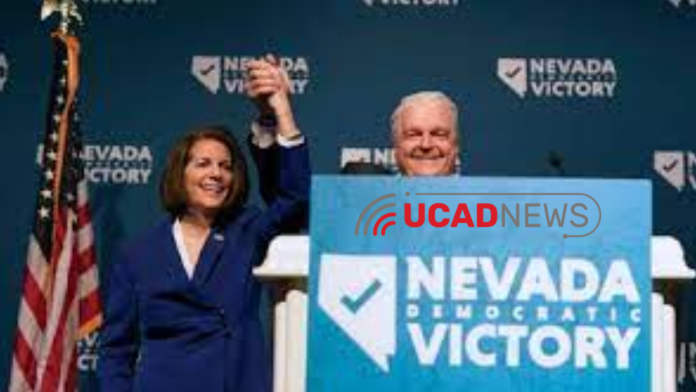 The Democratic Party retained majority control of the US Senate after winning a key seat in Nevada, amid fears that Republicans will gain a majority in the lower House of Representatives.

Miz Masto became the first Latino elected to the US Senate six years ago.

Georgia is still awaiting the results of the Senate elections.

No candidate received 50 percent of the vote, so a runoff between the top two candidates would take place four weeks later, on December 6, according to the rules.

Catherine Cortez Masto currently has 60.4 percent of the vote in the latest batch of 23,000 ballots counted in Clark County, according to local Nevada Independent news outlets.

While his rival Adam Laxalt received 35.4 percent of the vote.

After winning Nevada, Democrats will now have 50 Senate seats, compared to Republicans’ current 49.

It is considered a remarkable achievement by the party despite President Biden’s current slump in the ratings and against a backdrop of the highest inflation in the United States in 40 years.

His expected victory in Nevada secured control of the Senate.

“I feel good and I’m looking forward to the next few years,” President Biden told reporters.

Meanwhile, Republicans appear to be edging closer to a majority in the House of Representatives.

It looks like the Republicans will win the majority, but it turns out that the majority will be very small.

However, President Biden has not yet given up hope of a majority there.

He said he was closely watching the race for the remaining seats in the lower house and did not rule out the possibility that Democrats could still win a majority.

But he admits that, “it’s going to be a really big ask that everything has to be like us.”

Biden’s team is projected to win at least 210 seats. But the Republicans are already ahead with 214 seats.

They need four more seats to regain control of the House of Representatives.

In US midterm elections, opposition parties usually do well. This result appears to be the best in twenty years for the opposition.

In 2002, under George W. Bush, the Republican Party took control of both houses of Congress.

The election, held two years after every US presidential election, will determine the balance of power for the remaining two years of President Joe Biden’s term.

According to the results obtained so far, if the Republicans get a majority in the lower house of Congress, the implementation of President Biden’s program will face major obstacles.

But he said he’s open to working with Republicans, and will hold a “bipartisan” meeting between the two parties next week.

‘Exterminate All the Brutes’ offers a searing second take on US...